In 8th grade, around 1995, I started using my half hour free time break at school to jam with some friends in the Thompson Middle School music room. While other kids would be outside or in the gym, Nate Robinson, Jason Holland and I were allowed to crank up the PA and basically have a brief moment of artistic freedom daily in the music room. We started learning Nirvana and Green Day songs and playing for 20 minutes during middle school dances & local events. We were also playing a few originals at the time. Later in high school, the unnamed band changed and reformed with Zack Smith: Keys/Vox, Adam Bauman: Bass, Jason: Drums/Vox, and myself.  We put carpet on the walls of an abandoned hog barn as the metal walls and ceiling was deafening with our amps turned up. We called ourselves Keepers of the Carpet and playing the high school prom and graduation was a pretty big accomplishment to us. Zack later went to ISU and started playing bass and the band recruited his brother, Pete Smith, to jump in on guitar. Even though Jason and I were under 21, we started playing bars and events in Ames our freshman year of college. All of KotC were going to ISU while I was studying music at Central College. It was during a VEISHEA battle of the bands in 2001 we were playing where Patrick Fleming and Aaron Hefley asked us if we’d be interested in working on an album through their record label Bi-Fi Records. We recorded our first album the summer of 2001. I moved to Ames and lived with Pete for the summer as we worked on the album. For whatever reason the album did well locally and it debuted in the CMJ top 100 and stayed there for the time being, so we hit the road often and did some summer touring as well. Tyler Smith, Pete and Zack’s cousin, took over on guitar for Pete, and for a brief time Jason left the group to concentrate on his education and career while the group toured with our new drummer Joel. The band called it quits after a two week tour in 2002 and reunited to play as a five piece (Jordan, Jason, Zack, Pete, Tyler) at a sold out M-shop farewell show.

I continued to record some solo material with Aaron Hefley at Bi-Fi and Jason and I later started to play around with some new material in 2003. We had somewhat of a rotating line up with Paul Friemel and Dan Shea on bass, while our pal Rano LoVan stayed on with Guitars/Bass/Vox. I finished recording a few songs with Aaron at Bi-Fi and Keepers of the Carpet put that out as the “The Pride of Zebulous” EP. The release show was shared with OK Go, which was pretty exciting. KotC played off and on for a couple of years. After college I moved to Iowa City for about a half a year and started writing what become our second full length album “Just Set Fire to the Prize.” I moved to Ames in early 2006 and started living with Jason and our new friend Eric Moffitt. Jason and I started jamming some new material in the basement (my room) while Eric, who played guitar, listened in. One night during a practice Eric came down into the basement, plugged his guitar into his amp and started playing along with us. It was a bigger and better sound than we had ever had before, and now as a five-piece (Jordan, Jason, Rano, Dan, Eric) it really opened up the sound and gave us more options. We recorded “Just Set Fire to the Prize” at the Blacklodge Studio in Eudora, KS. It was nice to get away from our normal lives in Ames and devote ourselves to the recording process without any more distractions than ourselves and our new favorite beer we couldn’t get in Iowa, Fat Tire. David Chutka, or engineer and co-producer, was amazed (I’d say impressed) with how much Fat Tire we got through in the recording process. We put out the new album ourselves and our song “Crazy Things” was in rotation on 105.1, the big Central Iowa alternative rock station, thanks to local music supporter, head DJ, and pal Tony Tarbox. The band played for a couple of years after that. As time goes, people moved to different parts of the countriy, got married and started families. For about a year the group played shows here and there as a four-piece, with Eric, Jordan, Jason, and new bassist, Jacob Wolfgang.
in 2016, I reissued the first Keepers album on bandcamp with a lot of extra and live material. There are more fun and interesting unreleased songs and ideas floating around, so I hope we haven’t heard the last of Keepers of the Carpet. Listen and/or purchase by clicking HERE! 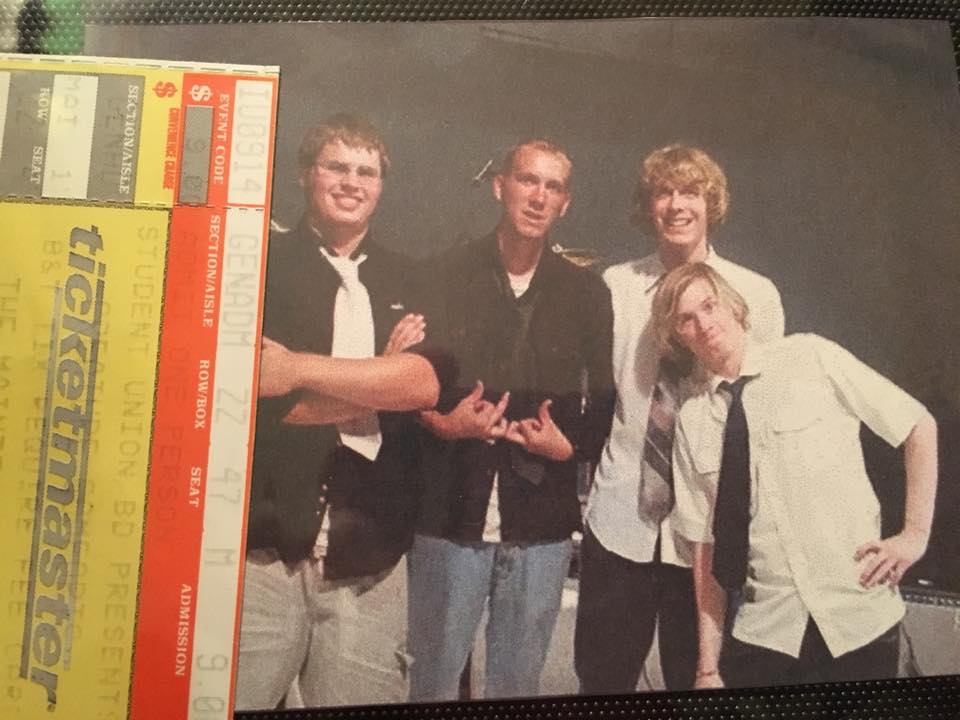